Ancholme Rowing Club are our closest neighbours so we wanted to turn up with as many boats as possible. A few entries had to be dropped but we entered seven crews in the end which is our biggest entry to an event as a club so far!

In Division One we s 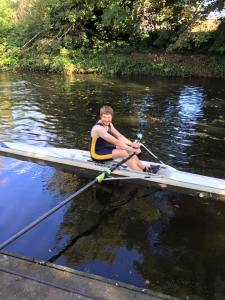 Division Two saw Liz and Olivia racing against Shelley and Charlotte in Womens Novice Double Sculls and George trying his hand out in Novice Single Sculls.

Everyone did fantastically well with many of the crews racing for the first time and for some getting that important first ever race out of the way.

In the end the biggest cheer of the day came when the results (round the corner at the pub!) were announced and Bob and Dave had won the Masters E/H double sculls category again! A great result for the guys again showing everyone else in the club that age is but a number!

A final thanks must go to Ancholme Rowing Club for a brilliant day out and for the loan of many boats on the day which really helped us out. Some good relationships with our neighbour club remade!